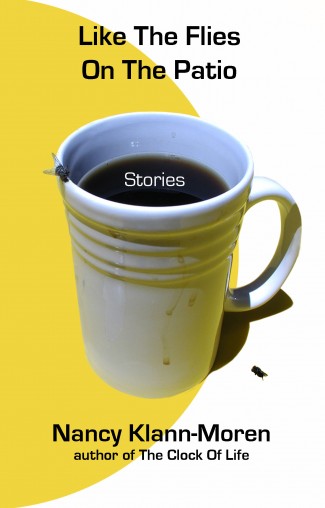 The thought of returning home was constant, but I drove on, as if powered by the menacing heat.  Part of me was anxious to reminisce.  To laugh lighthearted, like when we were little girls who wanted to ride on lightning bolts and shake hands with astronauts.  Another part of me felt trapped in a web of politeness and the inability to say no.

Wind gusts shook the car.  The wing of a moth flapped next to a yellow glob on the windshield.  It reminded me of the insects Yvonne caught in elementary school, from the windowsills above the stalls of the girls’ bathroom.  She’d rip one wing off and watch the creature thrash about the tiled floor, in circles.

I reached for my cell phone to call Yvonne and beg off with an excuse.  The signal was low, on its last bar.  I scrolled through the menu for her number,  just as the truck she had described came to view.

“You’ll pass an old, rusty panel truck,” she’d said.  “Sittin’ on concrete blocks.  It’s hard to miss.  The word OOPS is spray painted across the side.”

The word was huge, and sloppy, with drips streaking down to the running board.   A knot settled in my stomach as I passed by.

“Keep driving,” she said.  “Seventeen miles past the truck, turn right and keep going straight until you see the Shady Cabana Trailer Estates.”

If it weren’t for the prickly-pear garden and two plastic flamingos perched next to the hitch, Yvonne’s runty trailer could have been abandoned.  The cocoon shaped Airstream was pocked with dents.  It looked crippled, supported by cracked, airless tires.  A homemade sign next to the filmy louvered windows read, “The Silver Twinkie.”

The door opened.  A woman filled the entrance.  She had on a sleeveless muumuu.  The color matched the blue painted on her puffy eyelids.  I wasn’t sure if it was Yvonne until she stepped into the garden and waved.  The features of the girl I once knew were covered with swollen skin.

“Welcome to my abode.”  Yvonne said.

When we stepped inside, the linoleum floor bounced as if attached to springs, and the door gave a husky wine as it closed.  The swamp cooler droned.  It seemed as if I could span the trailer from kitchen to sleeping area in five or six steps.

“Sit, sit, sit,” she said, like she was training a puppy.  I obeyed, and sat on the tweed sofa behind a maple coffee table with an empty shoestring potato can on it.  The heavy smell of pork and beans filled the space.

Yvonne sat across from me, on an upholstered bench next to a worn Formica table.

She reached in her pocket and pulled out a pack of cigarettes, then stretched to grab an ashtray from the bookshelf next to her.  An ice pick balanced on the top shelf.  The words, Death Valley Ice Company were stamped on the wooden handle, in red block letters.

Instead of lighting up, she said, “My liver’s startin’ to rumble.  You want to join us?”

“Usually it’s just me and Jack.”  She got up and looked toward the kitchen area.  A bottle of Jack Daniel’s was on the counter by the sink.  I checked my watch.  It was close to two in the afternoon, and I hadn’t been there five minutes.  I don’t drink before five.

“Sure,” I said, and thought, Jesus, how can I get out of here politely?  I looked at the floor, to see brown spots on the linoleum.  Perfectly round drips, like dried blood.  Or it could have been sauce from the pork and beans.

“Only since Larry died.”

Our eyes met.  My insides tightened.  “Larry?  Your husband?”

“Yep.  Well, common law.  Larry was a loser.  A real whack job.”  She took a sailor’s gulp of Jack.  “When we met, he drove a taxi.  By the time we moved in together he was a part-time drunk, a part-time bricklayer, and a full-time man of God.”

“He was crazed with the Holy Scriptures.”  She shook her head.  “His own damn version.  He wasn’t Baptist or Presbyterian, or anything like that.  He was a self-serving Man Of God with a Dodge Ram pulpit.”

Yvonne leaned forward and coughed.   White spittle collected in the corners of her mouth.  I noticed movement past her shoulder, on the bookshelf.  A roach crawled over the ice pick.

“He was an unpredictable freak, Rosy.  I never knew what to expect next.”  She took another drink.  “Every week brought seven days of damnation for the unclean spirits that dwell in us all.  Myself in particular.”

Yvonne watched me reach for my purse and set it on my lap.  My keys had been on top, but slipped inside with the sudden movement.

“What happened to him?” I tried to ask casually, but the words came out shaky.

“I was on the front porch watching him preach to no one, from his truck bed.  The Dodge rocked from his gyrations, like it’d been caught in its own little earthquake.  He squealed about brimstone and the fire that never shall be quenched.”

Yvonne’s face began to pinch.  I wanted scream at the top of my lungs and bolt out the door right then, but was afraid it was locked.

My hand searched deep in my purse.  The keys were nowhere.

“His face was gray as ash, and his arms were stretched out, fingers shaking like a son-of-a-bitch.”  She stood up to show me, and the Silver Twinkie moved.

“He was shouting to the Holy Ghost, and the veins in his neck jumped like they were trying to escape.  One big fat vein finally burst.  And Larry fell flat, choking on his own sermon.”

I froze, because of the way she stared at me.

What did you do?” I asked fast.

“I made a joyful noise unto the Lord, Rosy.  He’d finally given me a sign.”

“You betcha, Rosy.  And every day I thank him for taking Larry away.”

The next thing Yvonne said was, “Now he’s sent you back to me.”  She brought her hands together and rubbed them in a menacing gesture.  To be continued…….

The whole story is published in the short story collection, Like The Flies On The Patio, available on Kindle and in print at Amazon.