Home » Blog » SO WHY DOES HOOP STUT,STUT,STAMMER?

SO WHY DOES HOOP STUT,STUT,STAMMER? 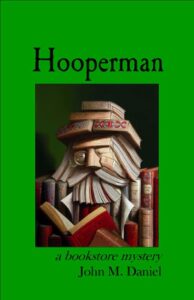 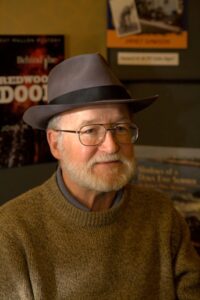 As a fledgling writer, John Daniel was the first person I met on the first day of my first writing conference.  Ever since, he has encouraged, supported, and guided me on my writing path.

Enjoy this great post from my teacher and friend John, on his decision to burden some of his characters with thematic “flaws”.

SO WHY DOES HOOP STUT,STUT,STAMMER?

I’m proud to say it: my new novel, Hooperman: A Bookstore Mystery is off to a fine start. Sales have been healthy, I’ve had two successful book signings, and the book has been reviewed generously in the local press and in online media sites. Publishers Weekly gave Hooperman a starred review. The customer reviews on Amazon make be blush out loud.

The reviews that have meant the most to me have come from friends who have bought the book and have taken the time to write me directly (mostly via email), telling me they like the book, and why.

Two responders, though, told me they liked Hooperman but asked me why I decided to give my hero a stammer? Was that necessary? What was the point? I did not take offense at their objection, and I admit that a stammering protagonist tends to slow down what otherwise could be a pretty fast read. In fact, I’m grateful for the question, because it gives me a chance to talk about talking, and about communicating.

Hooperman takes place during the summer of 1972, the summer of the Watergate break-in. The war in Vietnam was raging, and on the home front the rage about the war was loud and passionate. Our country was divided between the Establishment and the Counter-Culture, and never the twain would listen to each other. The division was loud and unpleasant. To paraphrase a line from Cool Hand Luke, what we had here was a failure to communicate.

I wanted to write about this failure to communicate, and so I endowed some of my characters in Hooperman with speech impediments and listening disorders. Hoop stammers. Janie, his life-long love, is so shy she’s practically mute. Lucinda, Hoop’s new love, can’t control her back-sass. Jack and Frank are good friends, but one’s a socialist and the other’s an anarchist, so they make a point of disagreeing on everything. Martin, the returns clerk, has a neurological disorder similar to Tourettes Syndrome, which peppers his every sentence with barnyard scatological cusswords. And so forth.

But there’s another reason I gave my hero, Francis “Hooperman” Johnson a stutter and a stammer. Hooperman: A Bookstore Mystery is, after all, a mystery, even though nobody gets killed. A serious  crime (major book theft) is going on, and Hoop is hired to find out who’s guilty and to bring that bibliokleptomaniac to justice. He’s an amateur sleuth, a bookstore cop, a private eye.

I’ve always admired crime novel protagonists who have a special problem to overcome. Michael Collins’s Dan Fortune has only one arm. James Lee Burke’s Dave Robicheaux has an on-going battle with alcoholism. William Doonan’s senior sleuth, Henry Grave, has to deal with aging issues like nodding off and forgetting facts. Lionel Essrog, the protagonist of Jonathan Lethem’s Motherless Brooklyn has Tourettes, big-time. Nero Wolfe is obese. Not to mention the problems Virgil Tibbs has to face in the Jim Crow South, or that Jane Tennison has to overcome as the first female Detective Chief Inspector in London’s male-dominated Metropolitan Police Service.

Compared to the obstacles faced by some of these sleuths, Hoop Johnson’s stammer is a walk in the park. In any case, and in spite of his disability, he does manage to earn the respect of his fellow booksellers, and in so doing he solves the mystery.

To those of you who still object to the stammer, because it slows down your reading, I urge you to read slowly, and to listen. I think you’ll find that the stammer is (in the words Mark Twain used to describe Wagner’s music) “not as bad as it sounds.”

Hooperman Johnson is a tall, bushy-bearded man of few words. He works as a bookstore cop, catching shoplifters in the act. It’s a difficult job for a man with a stammer, but somebody’s got to do it, because Maxwell’s Books is getting ripped off big-time. And, more and more, it looks like the thief works for the store.

Who’s stealing the books? Martin West, the foul-mouthed nutcase in charge of shipping and receiving? Millie Larkin, who hates the boss because he’s a man? Could it be Lucinda Baylor, the black and sassy clerk that Hoop’s in love with? Jack Davis, the socialist, or Frank Blanchard, the anarchist? Or maybe even Elmer Maxwell himself, the world-famous pacifist bookseller?

For more information about Hooperman, including ordering info, see: http://www.danielpublishing.com/jmd/hooperman.html

John M. Daniel is a lifelong bibliophile, having worked in eight bookstores. He’s also the author of fourteen published books, including the well-reviewed Guy Mallon Mystery Series. He lives among the redwoods in Humboldt County, California, with Susan Daniel, his wife and partner. They publish mystery fiction under the imprint Perseverance Press (Daniel & Daniel).

Thank you John for sharing this technique with us.  What flaws have you imparted on your characters?  I’d love to hear.