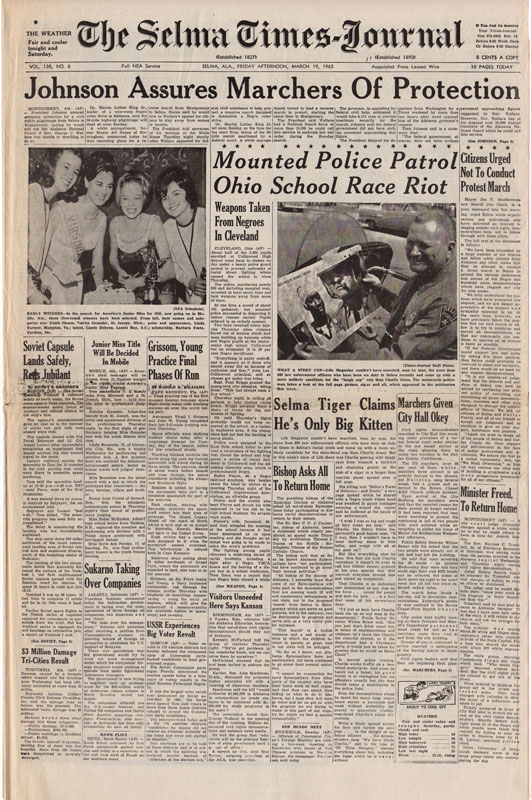 This is day thirteen after he arrived in Selma to take part in the right-to-vote march to Montgomery.

Thu, Mar 18, 4pm ― Last night’s party got pretty wild. We needed to blow off steam, and the consumption of a great deal of malt liquor and Kentucky Gentleman bourbon kept our fear of the unknown at bay. Each one of us was a member of the brotherhood of freedom fighters.

TODAY? Too hungover to care, but managed to make my way to the clinic to get my stitches checked out. The doc said it looks pretty bad, then gave me a bottle of pills. He said I should curtail any more civil rights antics until the infection quiets down. Who says “curtail and antics”? Dickwads, that’s who.

President Johnson assured adequate protection for a civil rights pilgrimage from Selma to Montgomery, saying he would call out the Alabama National Guard if Gov. George C. Wallace was unable or unwilling to do so.

A white segregationist, former Mayor Art Hanes of Birmingham announced today he was canceling plans for a reverse march from Montgomery to Selma.  Hanes said he would bow to Wallace’s appeal for citizens to stay away from scenes of tension.

The President told newsmen of his decision at the White House Thursday night shortly after Wallace appealed for federal civil assistance to help protect a massive march designed to dramatize a Negro voter drive.

The governor, in appealing for federal civil help, established it would take 6,171 men to provide maximum security for the march.  Johnson said the federal government did not have civilian personnel approaching that figure.  The President delayed his departure from Washington for a Texas weekend by more than two hours after word reached him of the Alabama governor’s request.  Then Johnson said in a statement that: “The federal government, of course, does not have civilian personnel approaching figures suggested by Gov. Wallace.  However, Gov. Wallace has at his disposal over 10,000 trained members of the Alabama National Guard which he could call into service.