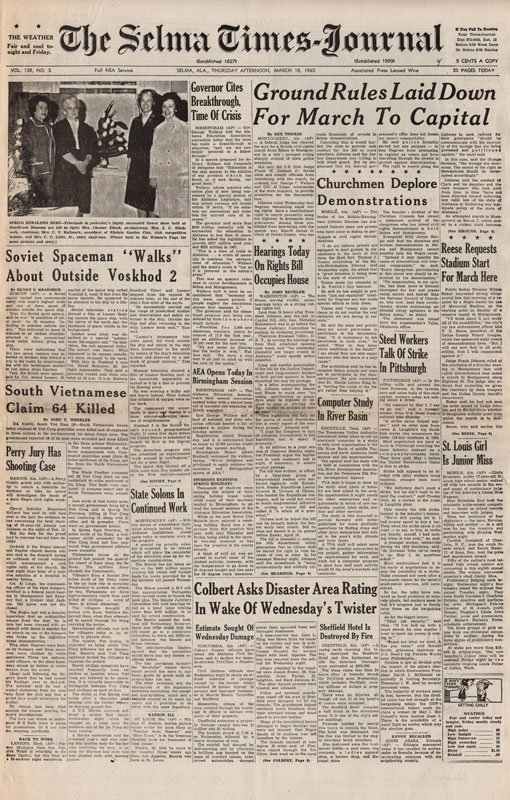 This is day twelve after he arrived in Selma to take part in the right-to-vote march to Montgomery.

Wed, Mar 17, 10:30 pm ― Today the judge ruled in our favor, finally. The State of Alabama CANNOT BLOCK THE MARCH. Finally, it’s time for action. Time to do what we came for. Judge Frank M. Johnson, Jr. made it happen.

We went to dinner to celebrate, and a lady named Viola joined us at our table. I nearly fell over when she said she’d left her five kids and husband home in Detroit to drive here after seeing Bloody Sunday on TV. She drove all by herself. She’s not here because of a church, or a political agenda―she’s here because she was moved to help. I swear, if she wasn’t married and twenty years older than me, I might have proposed right then and there.

Spam and I reminisced about our feeble attempt to finish the Moore march, then after a few more beers, I told both of them about Cassie and how I’m sure she’s the one. Spam said she sounds too good to be true, I must have made her up. Viola said I’d better not let her slip away.

Spam’s in the other room putting together a spur of the moment party with some of the other marchers staying in the project.

Ground Rules Laid Down For March To Capital, by Rex Thomas

Montgomery, Ala (AP)  A federal judge has cleared the way for a 50-mile civil rights march from Selma to Montgomery in a two pronged ruling sharply critical of state police measures.  Not only did U.S. Dist. Judge Frank M. Johnson Jr. forbid the state and county officials from interfering with the march, he ordered Gov. George C. Wallace and Col. Al Lingo, commander of the state troopers, to provide protection for the demonstrators.

Johnson ruled Wednesday that Negroes demanding equal voting rights have a constitutional right to march peaceably along the highway to dramatize their grievances.  Among those prohibited from interfering with the march was Sheriff James G. Clark of Dallas County, who has made thousands of arrests in Selma demonstrations.

Conceding that it would burden the state to provide safe conduct for the 300 or more marchers, Johnson said the Justice Department was willing to help stand guard.  But he emphasized that the federal government’s offer does not lessen the state’s responsibility.

He said police brutality served but one purpose – to stop Negroes from attempting to register as voters and from marching through the streets to protest against discrimination.  The right to march along the highway to seek redress for their grievances “should be commensurate with the enormity of the wrongs that are being protested and petitioned against,” the court said.  In this case, said the 13-page decision, “the wrongs are enormous.  The extent of the right to demonstrate should be determined accordingly.”