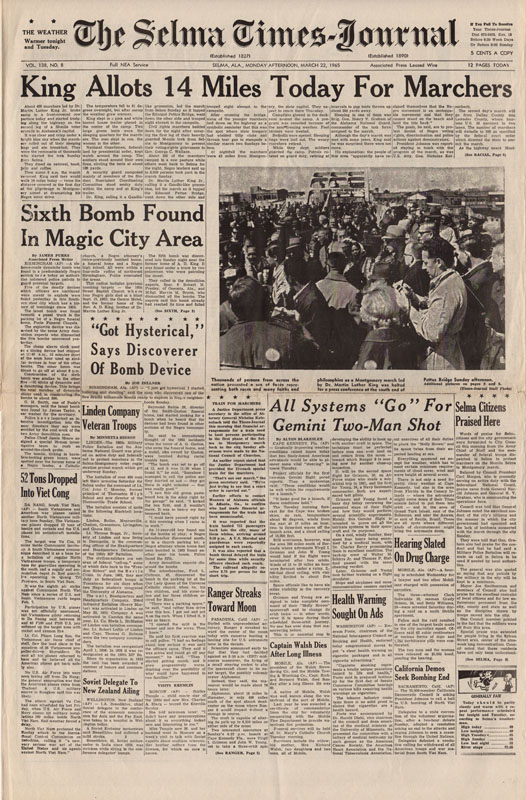 This is day seventeen after he arrived in Selma to take part in the right-to-vote march to Montgomery, day two of the march.

Mon, Mar 22, 10:40 ― Watched the news. First thing this am MLK, Mrs. King, Hosea Williams, Rev. Bevel, Lewis, Young and the rest left the camp to walk in the chilling rain, through swamp and farmland. Spam’s right, if anyone deserves to be there, it’s them. Besides, the shoulder’s killing me.

About 400 marchers led by Dr. Martin Luther King Jr. broke camp in a frost-covered cow pasture today and started trudging along the highway on the second leg of a 50-mile voter crusade to Alabama’s capital.

It was clear and crisp under a bright blue sky when the marchers rolled out of their sleeping bags and ate breakfast.  They were the remnants of thousands who started the trek Sunday from Selma.  They dined on oatmeal, toast, jelly and coffee.  Then about 8 a.m. the march resumed.  King said they would walk 14 miles today – twice the distance covered in the first day of the pilgrimage to Montgomery aimed at dramatizing his Negro voter drive.  The temperature fell to 31 degrees overnight, but after sunup the weather grew warmer.

King slept in a pink and white heated house trailer placed in the center of the camp.  Two large green tents were the sleeping quarters for the marchers.  The men slept in one, the women in the other.

National Guardsmen, federalized by presidential order, kept watch around the camp.  The soldiers stood around their own fires, circling the tents at about 100 yards.  A security guard composed mainly of members of the Student Nonviolent Coordinating Committee stood sentry duty within the camp and at King’s trailer.

Civil rights marchers bedded down for the night after covering the first leg of their heavily guarded 50-mile trek from Selma to Montgomery to present their voting-rights grievances to Gov. George C. Wallace.  About 300 of the marchers camped in a cow pasture while others went back to Selma for the night.  Negro leaders said up to 8,000 persons took part in the march Sunday.

Dr. Martin Luther King Jr., calling it a Gandhi-like procession, led the march as it topped the Edmund Pettus Bridge, went down the other side and trooped eight abreast to the campsite.  After crossing the bridge, some of the younger marchers laid down on the highway as a symbolic reminder that this was the spot where state troopers had wielded billy clubs and thrown tear gas to stampede a similar march two Sundays before.

At nightfall the marchers were 42 miles from Montgomery, the state capital.  They expect to reach there Thursday.  Campfires glowed in the darkness around the camp.  A program was canceled because of the near-freezing weather.  Foot blisters were treated.  Bedrolls were opened.  Sleeping bags were laid out.  The weary marchers retired.

While they slept, soldiers guarded the camp.  Patrols rotated on guard duty, retiring at intervals to pup tents thrown up about 200 yards away.  Sleeping in one of them was Brig. Gen. Henry V. Graham of the Alabama National Guard commander of the task force assigned to the march.

Although the day’s march was met with some jeers, King said he was surprised there were not more.  His explanation: the people of this area “apparently have resigned themselves that the Negro movement is an unstoppable movement and that they cannot stand on the beach and hold the tide back.”  The goals, he said, are to protest denial of Negro voting rights, discrimination and police actions against demonstrators.

President Johnson was reported staying in touch with the progress of the march, as was U.S. Atty. Gen. Nicholas Katzenbach.

The second day’s march will go from Dallas County into Lowndes County, where four–lane U.S. 80 narrows to two lanes.  The number of marchers will dwindle to 300 as specified by the federal court order which directed the state to permit the march.  As the highway nears Montgomery, it becomes four-lane again and King expects thousands to rejoin the march for the final leg.

Alabama National Guardsmen and Army military policemen ordered by the President to keep the marchers from harm, kept close guard.  They stood at intersections and crosswalks, patrolled in Jeeps and kept close watch along the line of march.  Also watching were groups of white persons, some carrying anti-Negro signs and shouting epithets.

The high and the mighty, the meek and the lowly were in the ranks.  Another Nobel Peace Prize winner joined King, the 1964 winner.  He was Dr. Ralph Bunche, United Nations undersecretary.  Jim Leather of Saginaw, Mich., a one-legged white man hobbled along on crutches and said, “With God’s help, I will go all the way to Montgomery.”

Cager Lee, hampered by age, trudged the first mile and then turned back.  Lee, 82, is the grandfather of Jimmie Lee Jackson, 26-year old Negro fatally shot Feb. 18 by a state trooper when the night march was broken up in Marion, Ala., 30 miles from Selma.  Priests, nuns, ministers and rabbis walked. Beatnik types were there. So were white women, Negro civil rights leaders, a Negro pushing his baby in a stroller.  Some were well dressed, some wore Levis.   Some sang freedom songs, some carried placards.

As the marchers left Brown Chapel A.M.E. church in Selma, Mayor Joseph T. Smitherman said, “I will be glad to get these people out of town – but I am afraid some of them will come back.”  Some of them had been here for about 10 weeks – during marches, attempted marches, a vigil at a street blockade at the church, the fatal beating by white men of a Boston minister, the Rev. James J. Reeb.

Occasional rest breaks were called.  Sandwiches and sweet rolls were passed around. Portable toilets were brought up.

With darkness approaching, the marchers turned up a county road to their campsite where four large tents awaited.