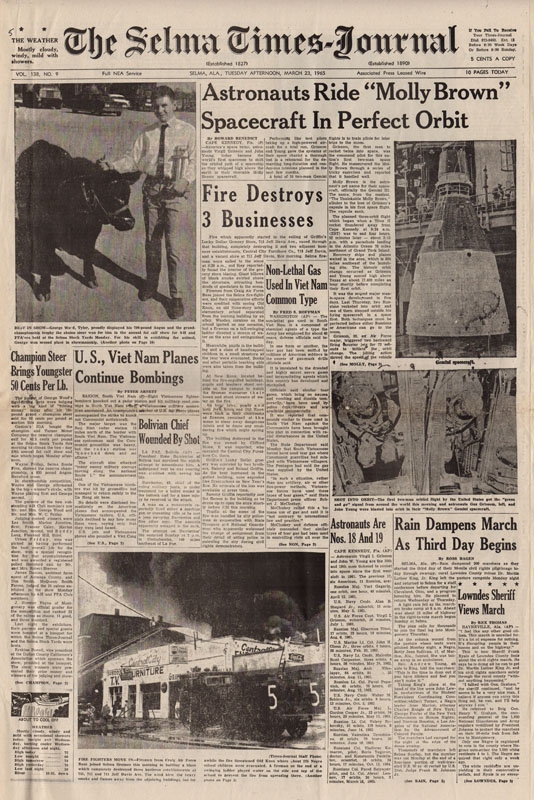 This is day eighteen after he arrived in Selma to take part in the right-to-vote march to Montgomery, day three of the march.

Tue, Mar 23, 11:55pm ― Rain―all day. Sat around and shot the shit with the neighbors, then went down to Sylvan Street. I’m getting antsy, and looking forward to tomorrow when we can join in again at the County line. Never thought I’d say this, but with all the new supporters and reporters arriving, I’m getting tired of recounting Bloody Sunday.

This afternoon, it was pointed out to me that I use the word douchebag a lot. Ha, ha, yes I do.

Selma, Ala. (AP) – Rain dampened 300 marchers as they started the third day of their 50-mile civil rights pilgrimage today through swampy, rural Lowndes county minus Dr. Martin Luther King Jr.  King left the pasture campsite Monday night and returned to Selma for a staff conference before departing for Cleveland, Ohio, and a program honoring him.  He planned to return Wednesday or Thursday.

A light rain fell as the marchers broke camp at 8 a.m.  Ahead was about 25 miles of highway in the right-to-vote march begun Sunday at Selma.  The plan calls for thousands to join the final leg into Montgomery Thursday.  As the column wound from the pasture where tents were pitched Monday night, a Negro, Betty Jean Sullivan, 17, of Martion, Ala., fainted.  She was taken away in an ambulance.

Rev. Andrew Young, an aid to King, told the marchers: “This is the time to drop out if you have blisters and feel you can’t make it.”

Taking King’s place at the head of the line were John Lewis, co-chairman of the Student Nonviolent Coordinating Committee; Albert Turner, a Negro leader from Marion; attorney Charles Rangle of New York; George Fowler of the New York Commission on Human Rights; and Norman Houston, a Los Angeles of the National Association for the Advancement of Colored People.

Thousands of marchers left Selma Sunday, but the number was cut Monday at the end of a four-lane portion of well-traveled U.S. 80 as directed by U.S. Dist. Judge Frank M. Johnson Jr.  The number will increase for the final leg of the 50-mile trek into Montgomery, when the highway becomes four lanes again.  By order of the judge, the marchers must reach the Capital building by 4 p.m. Thursday.

The 300 marchers were almost to the halfway point when they bedded down under big tents in a pasture near the Big Swamp of Lowndes County, a fertile land dotted with herds of white-faced Herford and Black Angus cattle.  The pasture is owned by Rose Steele, a Negro store owner.   She did a brisk business in the store selling odds and ends to the marchers after they completed the second day of their five-day walk.

The path ahead for today along the two-lane highway includes deep water on both sides of the road for a mile and a half.  This is the Big Swamp.  Along this portion there are five bridges.  On the last bridge a blind curve goes into a steep hill and then another blind curve. The shoulder is no more than four to six feet wide.

The only trouble encountered by the marchers so far has been foot blisters.  They walked 17 miles Monday and plan to cover 20 today.

While they marched, there were these other developments on the racial scene.

In Washington, Senate leaders said if President Johnson’s voting rights bill – aimed at solving Negro grievances – is not passed by April 15, senators will forfeit their Easter recess.  Johnson continues to follow progress of the march.

At Independence, Mo., former President Harry S. Truman termed “silly” the Selma-Montgomery march.  “They can’t accomplish a darned thing.” He said. “All they want is to attract attention.

The leader of the march to Montgomery, Dr. Martin Luther King Jr., was joined Monday by his wife.  At one rest stop, King said that his feet were bothering him.  He put on an extra pair of socks.  “My feet don’t feel so good either,” his wife said.

An Army Jeep moved along ahead of the marchers on the highway.  It carried a large yellow sign: “Caution. Marchers ahead. Keep right.”

Federalized Guardsmen and Army troops accompanied the marchers.  At nightfall they ringed the camp again.

As the marchers approached one service station, the white operator closed the station and put a wooden barricade across his driveway.

King, and the other marchers, also saw billboards showing him at a former interracial school in Tennessee.  The captain reads: “Martin Luther King at Communist training school.  Ned Touchstone, secretary of the citizens Council of Louisiana, Inc., said his group plans to put up 807 of the billboards throughout the United States.

Other segregationist feelings were expressed on yellow leaflets showered on the marchers by a light airplane.  The leaflets called on white citizens to join “Operation Ban,” described as “selective hiring, firing, buying, selling.”  The leaflets said: “Unemployed agitator ceases to agitate.”  White Citizens’ Action, Inc., of Tuscaloosa, Ala., was printed on the leaflets.

King conferred with LeRoy Collins, director of the federal Community Relations Service, while Collins walked with him for about one and a half miles.  King said they discussed arrangements for arrival Thursday in Montgomery.  King planned to leave the march today to fly to Cleveland, Ohio, for a program in his honor.  He is to return Wednesday night or Thursday

At Montgomery, state legislators considered calling a legal holiday Thursday to shut down the Capitol as a protest to King’s march.  Nothing was decided.

A two-page advertisement in the Montgomery newspaper urged that citizens meet the marchers calmly.  The advertisement carried the signatures of 80 members of the 90-member City Commissioners’ Committee on Community Affairs and statements from Mayor Earl James and a number of religious leaders.

Some dissension appeared among the marchers.  When the number was cut back to 300, an unidentified Negro said: “Why can’t all the white people go back.”  A King aide, Rev. Andrew Young, said: “We must have at least a small group of white people because, finally, the white people are our protection.  Besides, this is not just a Negro movement.  We are dramatizing all of America’s problems.”

Twenty white marchers, all from other states, remained.  Among them was Jim Leather, walking on crutches.  Leather, with only one leg, had said he wanted to walk all the way.  He is from Saginaw, Mich.

Another King aid, Rev. James Bevel, criticized the marchers for bickering among themselves.  He told the group to quit complaining and obey all orders from all marshals.

Alfred Loeb, 38, an engineer from Philadelphia, said: “I ride a bicycle to work every day. I have bicycle legs but not walking feet.  My feet are awfully sore and I don’t know if I will be able to continue.”  Loeb added: “If someone had done something like this march in Munich before World Was II, maybe six million Jews would not have died.”