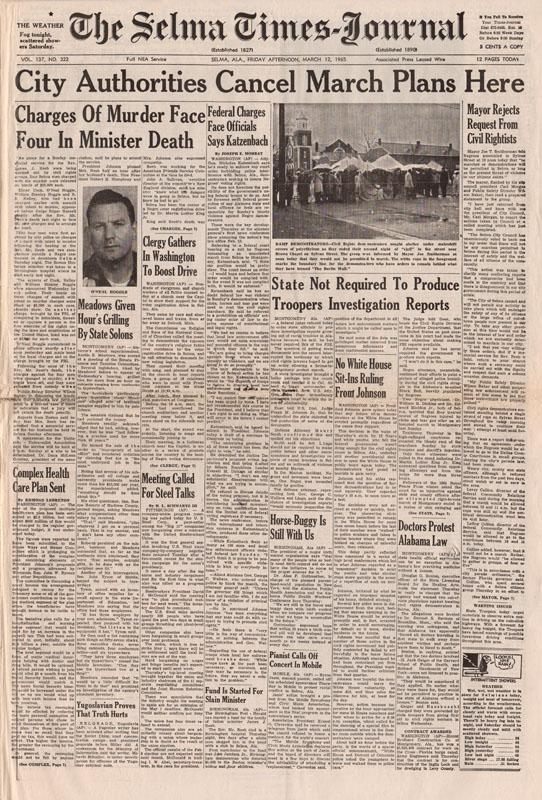 Excerpts from J.L. Rainey’s Journal, Selma, Alabama, March 1965, from the novel, The Clock Of Life, by Nancy Klann-Moren.

My posts will include both J.L’s journal entries, and actual articles from The Selma Times-Journal each day until he reaches Montgomery.

This is day seven after he arrived in Selma to take part in the right-to-vote march.

Fri, Mar 12, 11 pm ― It rained all day. A march to the courthouse was called but the police stopped us at the end of Sylvan. The commissioner tied a rope across the street as a barrier, so we stayed put. I didn’t really care. Everyone prayed, sang songs, and talked about Reeb. I finally tossed the worthless umbrella I had and let the rain wash over me.

Mayor Rejects Request From Civil Rightists ― Mayor Joe T. Smitherman told Negroes assembled in Sylvan Street at 12 noon today that “no marches or demonstrations will be permitted in Selma as long as the present threat of violence to our citizens exists.”

The mayor, flanked by his city council president Carl Morgan and Public Safety Director Wilson Baker, then read a prepared statement to the group.  “I have just returned from city hall and have with me the president of City Council, Mr. Carl Morgan, to report on the actions taken by Council at a called meeting which has just been completed.

“The Selma City Council has unanimously voted to back me in my order that there will not be any marches permitted in Selma during this period in the interest of safety and the welfare of all citizens of the community.  This action was taken to clarify many conflicting reports that a compromise had been made to the contrary and that there is disagreement in our city government during this period of crisis.

“The City of Selma cannot and will not permit any activity to take place which will endanger the safety of any of its citizens or the lartge influx of out-of-town people now present in our city.  To take any other provision at this time would not be in the interest of law and order which we are earnestly determined tdo maintain in our city.

“I ask that you obey willingly these orders, and if a memorial service for Rev. Reeb is held, return to your church where such a ceremony could be carried out with the dignity and respect that such a solemn occasion demands.  My Public Safety Director Wilson Baker and other cooperating law enforcement will remain at this scene to see that these instructions are properly policed.” 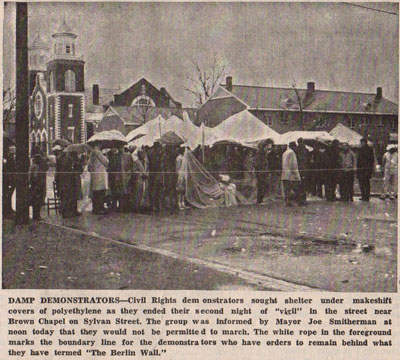 Civil rights demonstrators continued standing behind a single strand of rope on Sylvan Street throughout the rainy morning and vowed to continue their march attempt at least until Saturday.

There was a report this morning that an agreement under which the Negroes would be allowed to go to the Dallas County Courthouse in small groups, obeying the city’s parade law, had been made.

Weary city, county, and state officers, although in reduced numbers from the past two days, stood watch or sat in cars in the area.  Leroy Collins, director of the Federal Community Relations Service said during the morning that a march would be allowed between 10 and 11 a.m. but the rope was still up and the continual demonstration went into its 41st hour.

Collins added, however, that it would not be a march.  Rather, the Negroes would “be allowed to gather in groups, of four or five.”